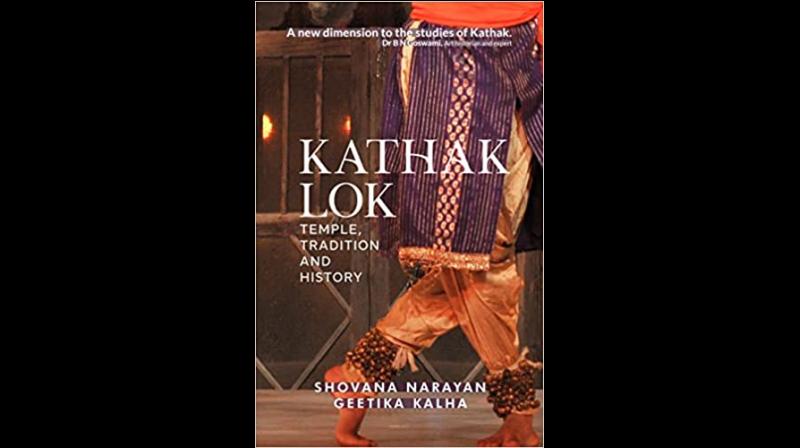 The who, what, when and where of Kathak

A remarkable journey of discovery, reading like a detective novel in the footsteps of a still living temple tradition, fills the opening chapters of Shovana Narayan and Geetika Kalha. Kathak Lok. Their exploration through 7,000 kilometres, remote villages and dusty pre-colonial archives is an extraordinary tale of the Kathak Lok and its relationship to the origins and practice of the classical dance now called Kathak. This superbly researched work bravely addresses the challenges of scholarly inquiry into the multiple competing narratives of the “who, what, where, and when” of Kathak.

In the temples the authors visited, they saw performers able to interact and improvise with worshipers to tell the stories. This was possible because their training had been immersed in sahitya, having memorized vast expanses of text as well as a deep understanding of philosophical interpretations. References to this community can be found in a Prakrit inscription from the pre-Christian era, in the 13th century Sangeet Ratnakar and tales of foreign travelers who “call them narrator-actors and sang and danced in temples and villages spreading the message of the divine and spreading human values.”

This groundbreaking work eliminates many of our accepted assumptions about the art form, surprisingly revealed as more colonial-era sights than actual history. It is frankly a humbling paradigm shift to learn that, while we all value intangible cultural heritage, the real history of Kathak and its movement from temple and village to court and stage has been hidden from view. view of all. Much has been forgotten and everything we have been told is not true. Kapila Vatsyayan called it “absolutely great field work; more impressive.”

The question of a journalist from Gaya, “Are you going to visit the Kathak villages?” led the 2011 census to discover that there were indeed 12 villages in UP and Bihar named kathak. These turned out to be named after the Kathak Brahmins.

While attending a show as part of a recent book launch, I was brought back to memories of many rural shows I remember from around the country. You could smell the fields and the kerosene lamps or the halogen lamps as these accomplished artists told and acted out the stories. The belt/dupatta constantly changed location as various characters in the story were created. It was all related to the folk stories and the Kathak we see on stage, but the importance was clear, it was the nritya seva source.

As the Mughal Empire weakened in the second half of the 18th century, Hindu and Muslim rulers began to frequent art and culture, and Kathaks were invited to court. An 18th century commentary by Priya Das recounts the solution of how to perform under the Muslim ruler of Hariya Saray while he would only dance in front of Hari’s image. He couldn’t bring an idol to court then “when he danced before the ‘Mir’, he put before him instead of an image, a harmless tulsi garland, a satisfying idol substitute because the tulsi is considered to be no different from the Lord!”

While the training of the dancers who performed in the Mughal, Jaipur and Awadh courts as well as in Raasleela was provided by Kathak Brahmins, they themselves only occasionally left their villages and temples for positions in the Hindu courts. . Photographs from Jaipur court records identify them individually and their salaries.

The debasement of Indian culture during the colonial era is well known. A typical example was the stigmatization and prohibition of temple dance traditions as prostitution. Many Kathak Lok villages were deserted as Brahmin practitioners felt pressure to dissociate themselves from this heritage and role as natya gurus, and restricted themselves to singing or playing musical instruments.

A detailed examination of the influence of Middle Eastern Islamic performance traditions has been consistently shown not to be found in the Kathak performed by female dancers in Mughal courts, just as the female dancers’ mujra projected by Bollywood is also out of about. A 16th century comparison Nartan Nirnaya description of Jakkadi, a Persian dance, took a line-by-line comparison of rhythm and percussion, movement techniques, costumes and performance structure to debunk the idea that female dancers of Mughal or other court Islamic people created the Kathak dance. Questions raised include whether this myth was part of the British depiction of the debauched Muslim court as well as how the history of Kathak Lok was lost, either deliberately or by the desire of the Kathaks themselves.

Of course, while the Kathak Brahmins performed to create a devotion for the divine in the hearts of their audience, the dancers they taught as gurus, like the talented and wealthy tawaif, danced more to entertain and certainly their art. was enriched by local influences. An example given of this is the impact of the vibrant drumming tradition of Rajasthan on the development of dance and the reduced emphasis on the storyteller-actor aspect.

Shovana and Geetika did not seek to prove a point or undermine any gharana but “to understand the existence of Kathak villages and what Kathak and ‘Kathak Lok’ stand for”. As Dr. BN Goswamy says, “a new dimension to Kathak studies has clearly been added”.