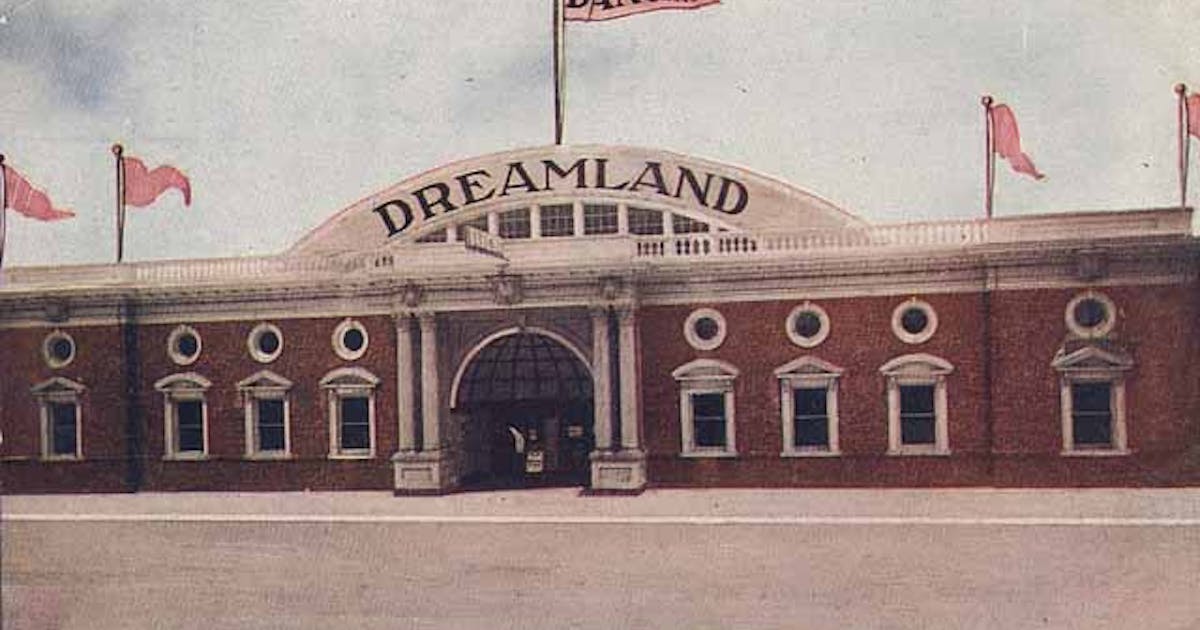 There’s an old joke that the Puritans wanted to ban sex because they feared it would lead to dancing. The Puritans, God bless them, didn’t have much luck banning sex, but dancing has long been a problem for those concerned with preserving public decency, however defined.

The uproar at a long-forgotten downtown dance hall in Minneapolis, directly across from City Hall, gives an idea of ​​how easily a step or two could upset local morality guardians.

The Dreamland Dancing Pavilion opened in late 1909, with a Renaissance-inspired facade featuring pedimented windows and an arched entrance flanked by twin Corinthian columns. But the real activity of the building, as designed by Minneapolis firm architect William Channing Whitney, was the ballroom at the rear, its vast expanse set beneath vaulted steel trusses.

The big downtown dance halls are long gone from the Twin Cities, but they were once hugely popular here and across the country. Dreamland was part of a chain of venues built around the same time in cities such as Cleveland, St. Louis, Seattle, and San Francisco.

In its first full year of operation, Dreamland claimed to have attracted 780,000 patrons, at a time when Minneapolis’ population was just over 300,000. As built, it was the largest dance hall in the city, although in 1915 it faced stiff competition from the new Majestic (later Marigold) ballroom at 1336 Nicollet Av.

When Dreamland debuted, the Tribune wrote: “This new palace of entertainment is a feast for the eyes with its myriad of colored lights and beautiful oriental decorations and a glance inside cannot fail to arouse an exclamation of joy.”

But it wasn’t long before less delightful exclamations began to emanate from city officials, police and local religious leaders. From their perspective, Dreamland was a den of iniquity where all too often underage dancers frolicked and prostitutes roamed the crowds looking for clients.

These concerns culminated in 1911 and early 1912, when Minneapolis officials attempted to shut down the last of the city’s once numerous brothels. With sex clearly on the mind of the municipality, the manager of Dreamland has been taken to court several times for allowing underage girls into the establishment and thus, it is claimed, propelling them onto the road to perdition.

The court cases understandably attracted a lot of attention from the Tribune and other local newspapers. The stories are fun to read today because the writers, by the narrow journalistic standards of the time, had to spout all sorts of circumlocutions and euphemisms to describe what was supposedly going on at the dance hall.

This is how stories have warned of the “harmful influence” of women “of questionable morals” or “the lowest character” who allegedly frequented Dreamland. One article spoke of a man sentenced to 60 days in county hospice ‘after admitting he had lived for six months on the earnings’ of one of the Dreamland regulars, who was duly identified as ‘an inmate of a Saint-Paul complex”. (Translation: The man was convicted of being a pimp, because in 1912, in the parlance of the newspapers, an urban “resort” was definitely not a family vacation spot.)

Religious leaders have railed against Dreamland, saying young women are at grave risk of moral decay once they walk through its doors. The Minneapolis Society for the Prevention of Cruelty to Children and Animals (yes, its original jurisdiction was not limited to four-legged animals) also took a dim view of Dreamland and its ilk, and campaigned to stricter regulations.

Among the ministers condemning Dreamland was a Lutheran pastor who claimed that several 16-year-old girls from his church made the mistake of going to the dance hall and “now walk the streets of Minneapolis at night.”

Still, not all officials saw Dreamland as an outpost of Satan. Minneapolis school superintendent CM Jordan, for example, reported that he went to Dreamland one night and “didn’t see anything there that couldn’t have happened properly in his living room.”

Much of the problem facing Dreamland and similar establishments was a state law prohibiting anyone under the age of 21 from dancing in public. JM Wood, the owner of Dreamland, pointed out how absurd the law was, given that 18-year-olds could marry in Minnesota. He went on to note that due to the law, the local Dreamland manager couldn’t even allow his 20-year-old wife to attend dances there.

The noise around the dance halls died down fairly quickly, however. And few notes were made in the press when new owners took over Dreamland in 1915 and renamed it Arcadia Dance Palace. It operated under this name until 1934, when it briefly became Aragon before closing permanently in 1935.

The old dance hall was then converted into a car park. Originally known as the Courthouse Garage, it remained in operation well into the 1950s. The building was finally demolished in 1961, its days of waltzes, foxtrots and controversy long gone. The Hennepin County Government Center now occupies the site, and if there is dancing there, I haven’t seen it.