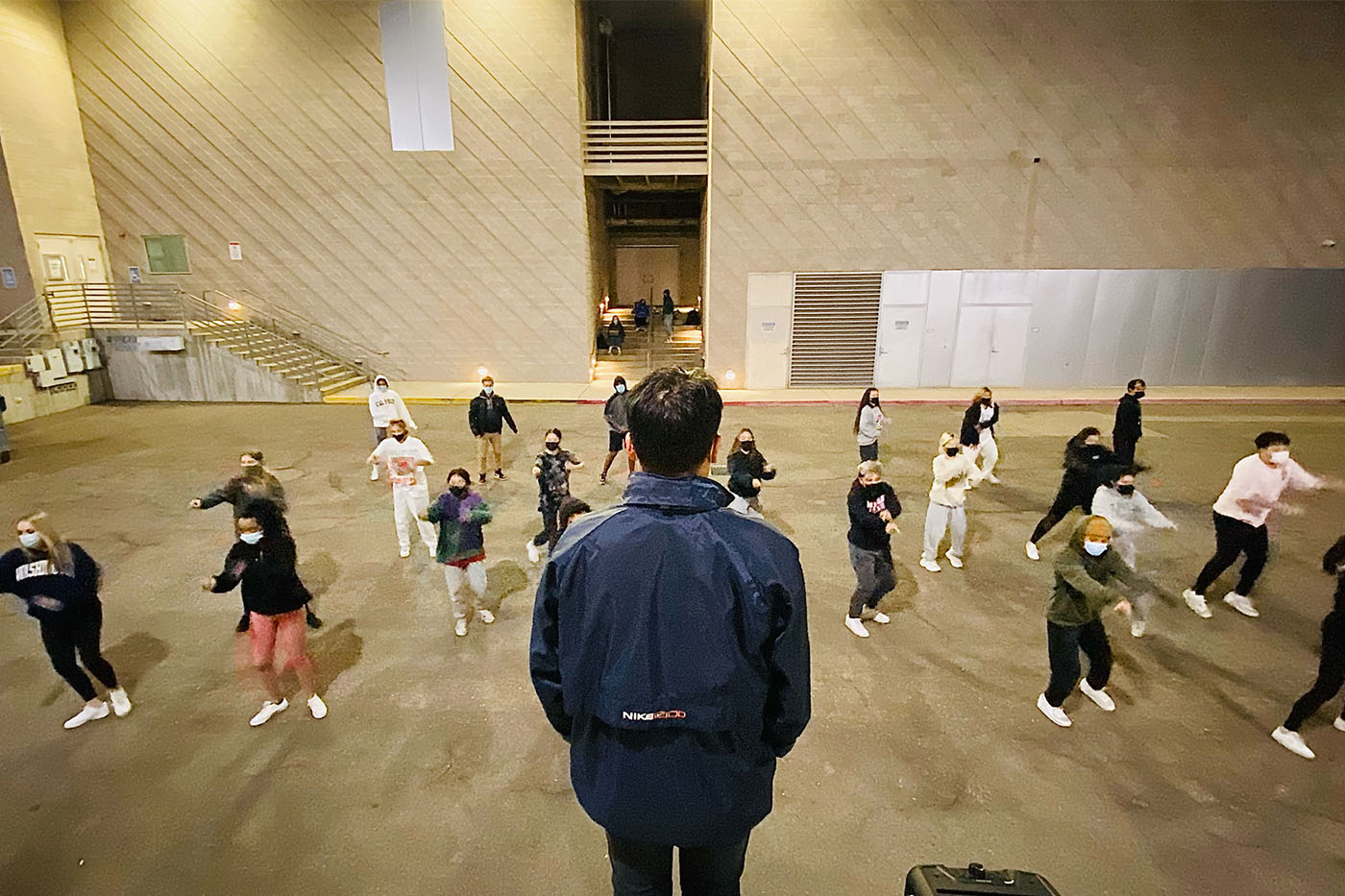 The dance team that practices until 1 a.m. for a week straight

There is a breeze in the cool evening air. Sweat runs down the side of your face. The choreographer says to do it again, for the fourth time. It’s 11 p.m. on a Monday night. There are still two hours before the first practice of “Hell Week”.

Hell Week is a tradition for United Movement (UM), an all-levels dance club without auditioning at Cal Poly. UM dancers take part in Hell Week, the days leading up to a performance.

UM’s next performance is Illuminate, a dance showcase featuring a variety of dance clubs on Cal Poly’s campus. Hell Week illustrates how committed these dancers are and how seriously Illuminate is taken.

Illuminate is an annual show that United Movement launched in 2019, to invite and unite the various dance organizations on campus. The first Illuminate was so popular that the second show was held at the Performing Arts Center and sold out. This year, UM hopes to do the same.

“We want it to be complete for the dancers who have worked so hard,” said Daryl Goh, chief business officer and co-president of UM. “We want them to have an enthusiastic following.”

According to United Movement, Illuminate’s purpose is “to unite Cal Poly’s many dance communities on one stage, bringing support and awareness to the diverse dance styles found on the Cal Poly campus.”

Most of the participating dance organizations are culturally oriented dance clubs. The show features a variety of dance styles, from hip-hop to contemporary to ballroom. Illuminate serves to shed light on the different types of dance that Cal Poly students participate in.

“I want people to share the different cultural dances with everyone, because a lot of cultural clubs don’t have much chance to showcase their work outside of the cultural community, so that’s a big deal,” said Goh.

Hell Week workouts begin at 8:45 p.m. at the Performing Arts Center (PAC) loading dock. A 15-minute warm-up is led by UM Dance Coordinators Elijah Malabuyo and Malia Weingarten. After a warm up, there are runthroughs, which start at 9 p.m.

Runthroughs are when all the dancers practice the whole set. A set for UM contains dance pieces by several student choreographers. UM’s set for Illuminate includes five different tracks, totaling six minutes. This entire set is practiced three times in a row during rehearsals. After walkthroughs, a thorough polishing of each dance piece occurs.

Each day of Hell Week is split into two parts, cleaning up a different dance track for the first and second half of the night. “Cleaning” is a term used in the dance community to refine choreography. The dancers will slowly break down the dance moves of the entire dance and repeat it over and over. The cleanup dance choreography begins once all dancers have nailed down the choreography and timing, making the dancers a unified group. Sometimes this level of UM perfection isn’t achieved until 1 or 2 a.m.

“I underestimated the amount of work required to produce such a performance,” said Harold Aguirre, a first-year industrial engineering student. “I was like ‘wow,’ I guess that’s what it takes.”

For some UM dancers, the long practice times before a performance were shocking. For others, it seemed normal.

“It kind of took me back to how I grew up in dance, so it was nice that I was able to find a community that was engaged in dance and performance,” said Daniel Puga , a second-year environmental earth and soil science student.

IT senior Fernando Valdivia said he’s thrilled that Illuminate is finally in person this year. For the club’s seniors who participated in the first Illuminate, like Validivia, this year’s performance is special.

“It’s the first time that multiple generations can experience it, which is really cool,” Valdivia said. “It feels like putting it back on for the first time.”

This hellish week is in preparation for UM’s final performance of the year, wrapping up a successful year of in-person performances. It’s the “last chance for everyone to really hang out, dance together, stress together, but all because we have the same goal of having a great Illuminate and because we all love to dance,” said Valdivia.

The United Movement’s motto “Growth in Community, Community in Growth” represents their commitment to welcoming people from all walks of life to grow as dancers and individuals.

The growth of the club has come a long way since its inception in 2017 by former Cydel Subijano. Now United Movement has about 70 dancers performing in Illuminate this year. The promotion of the club on Youtube and Instagram is what attracts many dancers.

“The performances seemed very high caliber when I was watching the videos, I was like I wanted to be part of this club,” Aguirre said.

Aguirre had never danced before coming to Cal Poly. After watching videos of UM’s performances online, Aguirre joined the club early in his freshman year on campus.

What Fernando Valdivia loves about UM is “definitely all the connections I’ve made over the years”. The combination of the social aspect and the passion for dance is why he thinks there is a strong appeal for UM.

“Most people I hang out with are all dance members, my roommates are dance members… That’s where I made most of my best friends,” Validiva said.

Tickets for Illuminate 2022 can be purchased here.