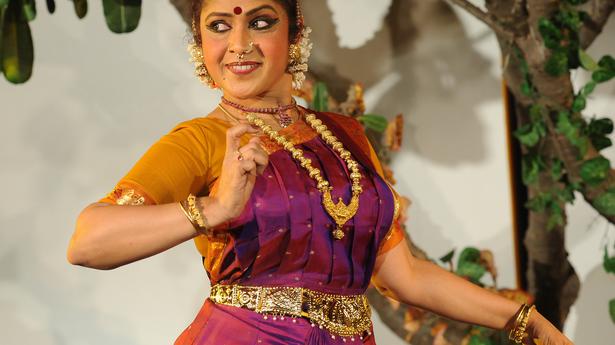 Yards of sheer fabric, intricate jewelry, crescent moon stud marks and the scent of sandalwood create the stage for one of the greatest love stories: the union of Venkateshwara and of Alamelumanga. These images were brought to life by the 15th century poet saint Taallapaka Annamayya, also known as Annamacharya.

Coming from an illustrious family of poets and musicians, Annamayya was the first Telugu poet to write poetry in the form of a song, with a main line (pallavi), refrain (anupallavi) and a series of verses (charanams). He is said to have written up to 32,000 sankeertanas, but only 12,000 survive, engraved on copper plates (known as tamrapatra) and discovered in 1922. The Tirumala Tirupati Devasthanam Trust published a set of 29 volumes of these discovered compositions titled Taallapaka Pada Sahityamu, which inspired masters such as M. Balamuralikrishna and Nedunuri Krishnamurthy to set 1,500.


While Annammacharya’s compositions found their way into the Carnatic repertoire through the voices of iconic artists such as M.L. Vasanthakumari and M.S. Subbulakshmi, they did not quite become part of the southern classical dance tradition. from India. With the exception of some bhakti keertanas such as ‘Sriman Narayana’, Annamaya’s more descriptive compositions have been neglected. Perhaps the poet’s verbose style didn’t leave enough room for the dancer’s imagination, or the sensuality of the verses demanded mature and sophisticated treatment.

In 2010, the young Carnatic musician and composer Sathiraju Venu Madhav set 108 of these complex poems to be tuned into 108 ragas under the guidance of Sujanaranjani. This facilitated their use in dance.

At the height of the pandemic, Sathiraju’s work rose to prominence again when Ananda Shankar Jayant’s institution of dance, Natyarambha, launched a year-long online workshop series titled “ Tamrapatra”, which gave dancers the opportunity to learn 12 Annamacharya compositions tuned by Sathiraju.

Aware of the differences in technique followed by dance schools, Ananda kept the teaching method fluid by focusing on the abhinaya pieces. She also ensured that each participant received a translation of the text, a transcreation of the lyrics and a basic preview of the music.

Anupama Kylash, practitioner and scholar of Kuchipudi and Vilasini Natyam, was asked to provide theoretical and contextual clarifications, as she did her research on nayikas in Annamacharya keertanas. It is rare to find a dance studio that offers such an academic context in its approach to choreography.

Ongoing workshops have involved artists as diverse as Anita Ratnam, who choreographed a piece in her Neo Bharatham style, Methil Devika in Mohiniattam and Sharmila Biswas in Odissi, demonstrating how the compositions lend themselves to different dance forms. . “Each of the artists presented brings their own approach. This is important because their interpretation of the lyrics will help broaden the perspective of the young participants,” says Ananda.

According to Anupama, “There is a separate dictionary for Annamacharya compositions. His Telugu contains elements of Marathi, Tamil and Sanskrit. This may be because he belonged to the district of Chittoor, which is at the forefront of several regional cultures.

Tamrapatra’s workshops cover a range of poetry, including those on love, devotion and humor, to avoid making sessions monotonous. “I’m glad the lyrics resonate with dancers today,” says Ananda.

Organized the first week of each month, the sessions are preceded by conversations, where Ananda and the guest artist analyze the composition to be resumed.

Those interested can register at https://tamrapatra.mystrikingly.com/ for upcoming sessions as well as recordings of previous sessions. Part of the proceeds go to support artists in Hyderabad.

The Bengaluru-based writer is a dancer and researcher.