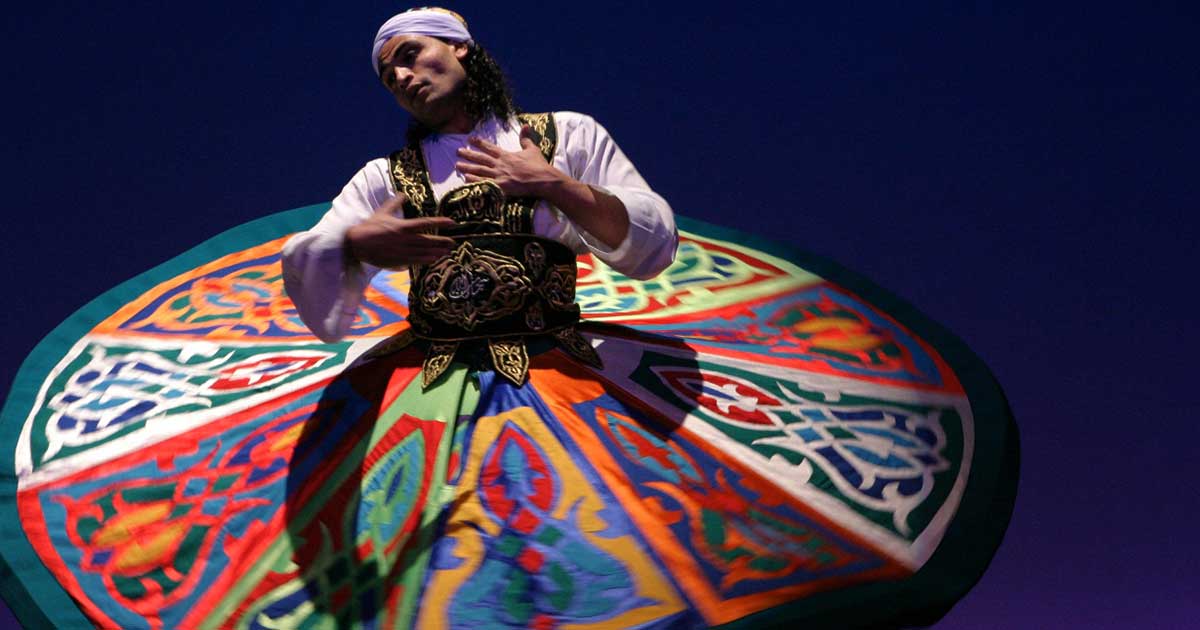 Spinning Away: the origin of the Egyptian folk dance Tanoura

Spinning Away: the origin of the Egyptian folk dance Tanoura

As I watch the belly dancer leave the room and turn to my cousins ​​to comment on her performance and flashy costume, I notice another performer entering and taking a seat in the center of the room.

“It’s the Tanoura! ”we blurt out happily, recognizing him instantly.

In a huge colorful skirt with lights tied on it, pants underneath and a white skullcap, the young man began to spin to the tunes of the Arab song ‘Doury Beena‘(Spin Us Around) alongside the sound of rhythmic applause from the audience.

As the layers of the skirts spun and the performance continued, we saw the Tanoura the dancer takes off a skirt, folds it and holds it in his arms as if it were a baby. Just before the end of her performance, the dancer removed a layer of the skirts, spinning it on her head, moving from table to table to spin the skirt on the audience’s head. I later learned that some believe it is symbolic of the Almighty showering participants with blessings.

As it continued to spin effortlessly, my mind wandered far, wondering about the origin of this dance which is today among the most popular Egyptian folk dances.

Tanoura is an Arabic word, which translates to skirt in English. It is a traditional folk dance in Egypt, where the dancer turns to the tunes of Arabic songs, sometimes also religious, known as Tawasheeh (a mixture of Quranic verses and classical poetry). If the dance is performed according to a spiritual association, it would rotate counterclockwise, symbolizing the Muslim pilgrimage around the Ka’aba. If it is for entertainment purposes, it could rotate clockwise or counterclockwise. the Tanoura is a unique dance that is often viewed as philosophical or even religious, taking the dancer to new spiritual levels.

Many historians say that the Tanoura the dance was first introduced by the Turkish philosopher and poet Jalal al-Din al-Rumi, and that it arrived in Egypt in the 14th century. Jalal al-Din al-Rumi was a renowned Sufi scholar in the 13th century and is said to have been the first Tanoura dancer in the Fatimid era. At the time, dancing was reserved for the Sufi community. Today it is also practiced by non-Sufis.

Some say that the Tanoura can be described as an evolved representation of the Sufi whirling dervishes, an important part of Sufism, known for its mysticism and spiritual mode of worship. The Sufi whirlpool is a physical act of meditation where the Sufis rotate until they reach a level of religious ecstasy. They wear long white dresses and perform in groups, unlike by Tanoura solo performance. Many say that over time the Egyptians made additions to the Tanoura dancing to make it more entertaining and fun, adding tambourines, colors, lights and music that is not necessarily religious.

Unlike most dances, which are mostly performed by women, this dance is only performed by men. Whether on a desert safari, a cruise on the Nile, a religious festival or al-mawlid al-nabawi (the annual celebration of the birthday of the Prophet Muhammad), the Tanoura is always a main part of the event’s programming. So if you are passing through Egypt and planning to attend a religious holiday or cultural event, make sure you don’t miss the exceptional Tanoura performance.

Subscribe to the Egyptian Streets weekly newsletter! Stay up to date with the latest news, arts and culture headlines, exclusive features, and other stories that matter, straight to your inbox by clicking here.

In photos: international musicians who performed in front of the pyramids of Egypt