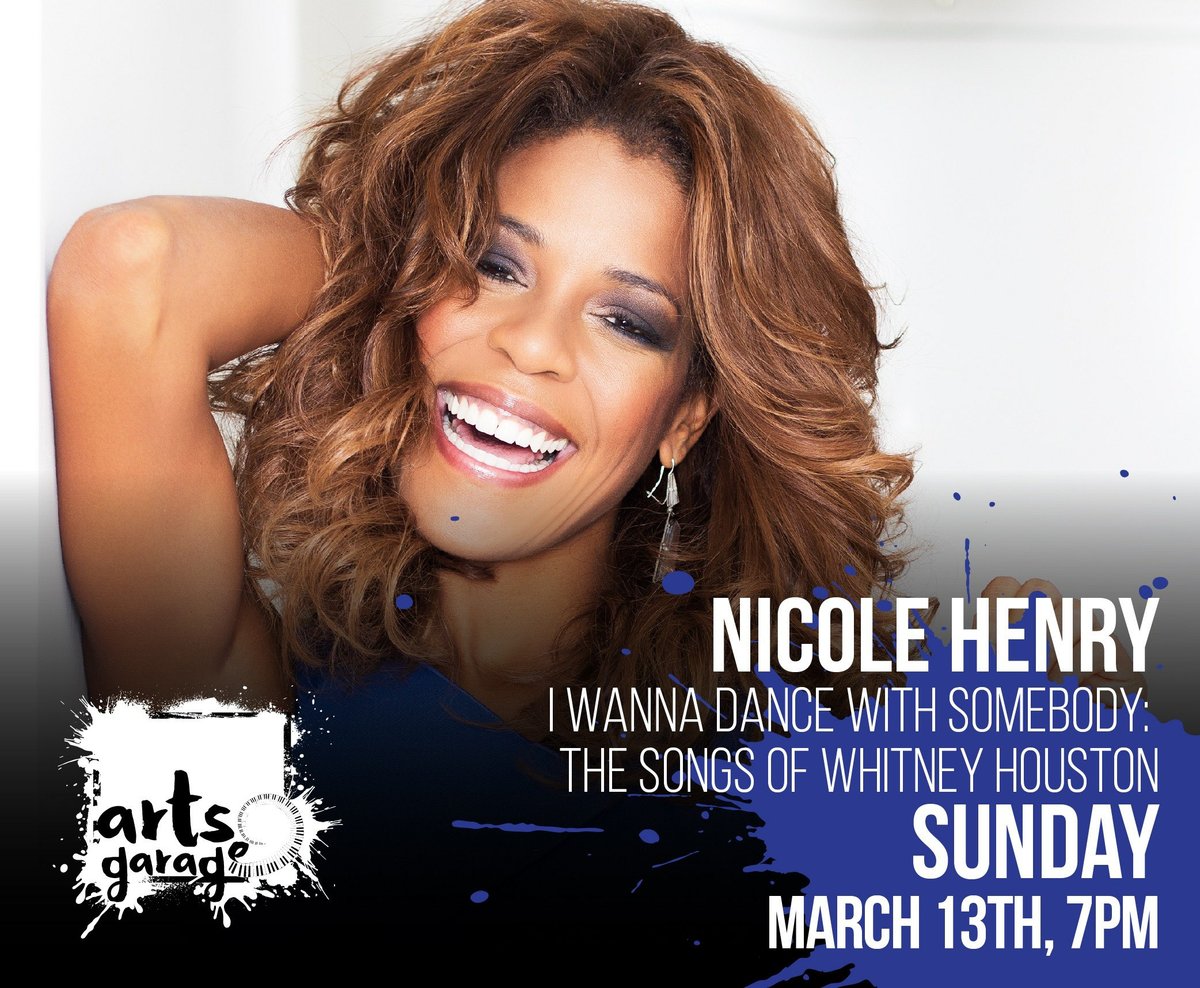 Nicole Henry – I Wanna Dance With Someone: The Songs of Whitney Houston

Soul Train award-winning singer Nicole Henry returns to Arts Garage with her theatrical concert-event “I Wanna Dance with Somebody: The Songs of Whitney Houston” for a jubilant night of celebration. In this superb Cabaret-nominated show, Mrs. Henry will embark on a joyful, narrative journey, weaving together the classic songs of one of the greatest voices in American music history while putting her stamp on some of Whitney’s greatest hits. , including ‘The Greatest Love of All’, ‘Saving All My Love for You’ and ‘I Wanna Dance With Somebody’, as well as other timeless Whitney classics. Written and directed by acclaimed theater director and in concert Will Nunziata (platinum recording artist Jackie Evancho, Tony Award winner Lillias White), this highly regarded concert will take place on Sunday, March 13, 2022 at 7 p.m.

Since her debut in 2004, Nicole Henry has established herself as one of the most acclaimed performers in the jazz world, possessing a powerful combination of dynamic vocal abilities, impeccable phrasing and a sincere and powerful emotional resonance.

She has captivated audiences in over 20 countries, headlining in cities including New York, Tokyo, Madrid, Moscow, Paris, Shanghai, Los Angeles, Chicago, Boston, San Francisco and Miami. Ms. Henry has also performed at over 30 music festivals around the world and at some of the world’s most famous venues including Blue Note; Jazz at Lincoln Center; blues alley; Archt Center; that of Feinstein; Green Mill; Jazz St. Louis; Madrid Jazz Festival; the Regatta bar; and Catalina Jazz.

She has recorded with some of today’s greatest musicians, including Kirk Whalum, Julian Lage, Gerald Clayton and Gil Goldstein, and performed with the Duke Ellington Orchestra, Henry Mancini Institute Orchestra and Michael Feinstein. At the end of 2019, Mrs. Henry returned to the theatrical stage and garnered critical acclaim in the musical “The Bodyguard”, and at the end of 2021 she will perform in the new musical “A Wonderful World”, the story of Louis Armstrong.

A longtime resident of Miami, Henry has been actively involved in supporting nonprofit community organizations such as the Miami Children’s Initiative, YoungArts, and Miami Music Project. She has been recognized by the City of Miami Beach and Miami-Dade County, proclaiming “Nicole Henry Days” in 2011, 2016, and 2017. She also served two terms on the Board of Governors for the Florida Chapter of the Recording Academy.

Pete Wallace is an accomplished keyboardist, producer, and songwriter who resides in South Florida. After earning a degree in Studio Music and Jazz at the University of Miami, he went on to work with some of the top artists in the music industry including P!nk, Herbie Hancock, Alejandro Sanz, Cher, Phil Collins , Richard Marx, Laura Pausini, Jon Secada, Julio Iglesias, La Ley, Jessica Simpson, Carlos Vives, Ricardo Arjona and the Backstreet Boys to name a few. As a songwriter, Pete has collaborated with artists such as P!nk, Sabrina Starke (Blue Note), Teddy Geiger and Ryan Cabrera. He is currently Jon Secada’s musical director and tours with Latin superstar Diego Torres. Pete is also busy on the local Miami scene playing a variety of gigs ranging from jazz to Latin pop. Additionally, he is a board member of the Florida Chapter Grammy Board and assistant professor of jazz piano at Broward College.

David Chiverton is a Miami native and a drummer extraordinaire. He attended Florida International University (FIU) on a full college scholarship with a key acting position in the university’s BigBand. There, David teamed up with Miami, Florida super-producer “Bigg D,” where he was the featured drummer every Wednesday night on Miami LIVE at Santos Miami, sharing the stage with artists ranging from John Legend to Lil Wayne. He currently tours and records with various talents and has been recognized as one of South Florida’s most sought after musicians.

DWayne “Saint Orbin” Bennett was born into a family of songwriters, producers, musicians and singers, with his first music teacher being his mother, who also sings and plays multiple instruments. Beginning on drums, Saint Orbin also began honing his skills on keyboard, bass, lead guitar and as a vocalist. Since 1998, he has been the founder and lead singer of the urban-inspired singing group KING and co-founder of DNA MusicBoyz. He recorded music for big names such as Jennifer Lopez, Betty Wright, Jagged Edge and Bootsy Collins. He has also performed with Yolanda Adams, Kanye West, Flo Rida, and Kim Burrell and has appeared on national television shows like ABC’s “The View,” “Good Morning America” ​​and MTV’s “Video Music Awards.” In 2017, he released his solo album titled “Soul of a JAmerican”.

Nikki Kidd is an international jazz singer who started singing at the age of four in Miami Beach. She received her bachelor’s degree from the University of Miami in Studio Music and Jazz Voice, as well as a minor in Music Business. At UM, Nikki studied with world famous jazz artists such as the late Kevin Mahogany, Kurt Elling and John Secada. She has worked with acclaimed artists Gloria Estefan, Michael Bublé, KC and the Sunshine Band, and had the opportunity to sing background vocals for Aloe Blacc (on Disney’s 2018 Christmas Special), Thelma Houston, Mary Wilson, Cory Henry with the Nu Deco Orchestra and on Prince Royce’s “Really Real”. Nikki also led the Gospel Choir behind the new Wailers song “One World, One Prayer” which was featured on “Stand By Me” (Celebrating Our Nurses). Nikki has also performed with the Florida Grand Opera in their production of the opera “Aida” at the Arsht Center and previously held a residency at the Historic Bamboo Bar at the Mandarin Oriental in Bangkok, Thailand. In 2018, she was voted “Best Jazz Act” by the Miami New Times, as well as by Legacy Magazine’s 40 Under 40.

Lenora Jaye is originally from New York, currently based in South Florida. She began her musical career as a featured vocalist for the funk-rock band Rhythm Republik where she performed at venues across New York including BB King’s, House of Blues, The Blue Note NYC and many more. . In 2016, she released her EP “FORCE OF LIFE” from TransPhatt Records. She currently performs as ‘Ella’ for the Sammy Davis Jr. & Ella Fitzgerald tribute show of South Florida and is also currently a weekly featured performer at Georgia’s Alibi-Wilton Manors. She is also one of the lead singers of the famous South Florida Motown/Supreme musical tribute band “The Ladies of Soul” and through South Florida Legends Incorporated she is the three of the new 3-act tribute show “Icons of SOUL” featuring the legendary music of Aretha Franklin, Patti LaBelle and Chaka Khan. She was voted BEST NEW ARTIST 2011 by SoulTracks.com for their Annual Reader’s Choice Music Awards.

Ellison Kendrick was born in Miami Beach of Jamaican American descent and grew up in a church where he was the lead singer in the choir. As a teenager, he was the lead singer of a band, which released an album and 2 singles, one of which reached No. 21 on the R&B charts. He was eventually signed as a solo artist by R&B legend Betty Wright (Ms. B Records) and toured as a backing vocalist for her, later becoming the male backing vocalist for Grammy winner Joss Stone. . He has worked with various international artists such as Enrique Iglesias and Hip Hop artist DMX. He wrote and released his single “BLACK SUIT”, which charted on the Billboard singles chart at number 11 and became the name of the group he now leads.