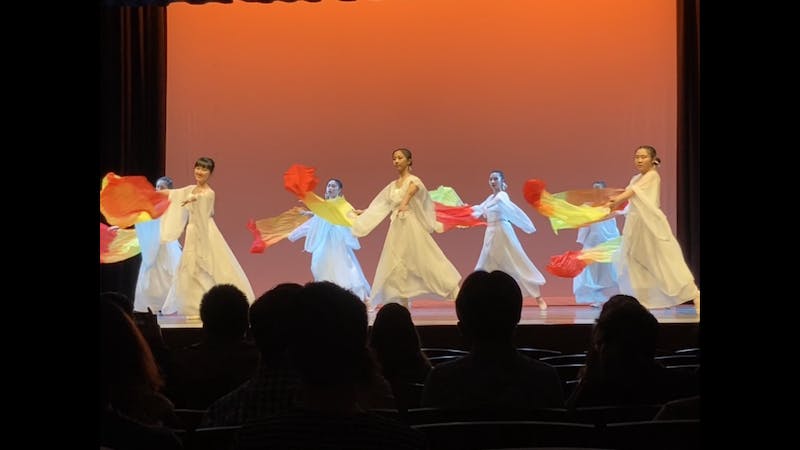 Lan Yun Blue Orchids performed their Spring Showcase on April 16. Although the on-campus dance group is dedicated to learning and performing traditional Chinese dance, they add a modern twist by dancing to songs that are popular in China today. It was the first time the group held their own showcase, which also included performances by Yong Hang Lion Dance Troupe, Music Dynasty, and Hopkins Oriental Music Ensemble (HOME).

The Blue Orchids began by performing a fan dance to the music of the Chinese drama The Untamed. The group said they chose this song in order to pay tribute to all the lives lost in the pandemic; the changing movements of the fans represented the changes in our lives.

The dancers shone in long white dresses that contrasted beautifully with the fiery orange and red of the fans. These were no ordinary paper fans either – each fan had a long strip of fabric billowing from the ends of the fan which served to accentuate the graceful movements and coordination of the dancers.

After the first dance, there was a performance by the Yong Hang lion dance troupe. I’m aware the lion was basically two students in a glittery costume, but when he appeared the illusion of a fearsome beast stalking the stage was absolute. Beyond the beating drums, crashing gong, and ferocious beast gait, there was a fun, modern sense of humor in the performance. The lion hit a giant cat toy and threw balls into the audience, much to our delight.

In another performance by the Blue Orchids, they danced to the Chinese drama’s “Like a Dream.” Minlan’s story. The performers danced without fans or other flashy props, allowing them to incorporate smaller, more complex hand movements into their routine.

The acapella group Music Dynasty performed two songs, “我” by Leslie Cheung and “Audition” by The Earth. Both songs were modern, with one in Chinese and one in English. The band sang with balance in the harmonies and nailed the dynamics.

Before the next Lan Yun dance, there seemed to be a bit of a technical difficulty, as the dancers stood in a ready position on a dark stage for a long time before the lights came on. To their credit, the dancers did not deviate from their positions and began their routine without a break. This dance incorporated water sleeves. The dancers’ dresses were specially designed to have these extremely long sleeves that created long, flowing movements reminiscent of the passage of flowing water.

HOME performed the piece “Jasmine Flower”. The band used traditional East Asian instruments including the ruan, erhu, dizi, gu, guzheng, and pipa. The piece was slow and peaceful, a nice traditional interlude between the more modern pop songs that had been playing all night.

The next dance was a solo piece by graduate student Candice Liu. She performed “The Letters” from the dance drama Confucius. It was another fan dance, and every move was flourishing and graceful, but done with great control and skill.

The Blue Orchids then performed the song “Grain in Ear”. It was a dance using round fans that really stood out for the modernity of the dance style. They combined traditional graceful and flowing movements with the dynamism and warmth that are firmly rooted in today’s dance culture.

The lion dance troupe performed a second choreography, this time with two lions. It told the story of two lions who competed for a golden pearl who realized they had to work together to succeed. This performance was more dramatic than the previous one, featuring dazzling flips and rolls from the lions as they fought. There was still that touch of humor, though, as they ended up having fun and kicking the pearl like a soccer ball between them as they left the stage.

There was a duet performance by seniors Charissa Zou and Heidi Zhang, performing “Big Fish and Begonia,” a story about a fish that falls in love with a human. They had great synchrony in their routine and skillfully told the story through their movements, until the tragic end of the fish having to return to its pond.

Finally, the Blue Orchids gave their closing group performance, another fan dance, to the song “Upwards to the Moon”. This was followed by a touching welcome to senior graduates Zou, Zhang and Cherlin Zhu, with flowers and heartfelt messages from some of the members.

In an interview with The News-Lettersophomore Sandy Wong reflected on what it was like to dance in the display case.

“Although it was super hectic and stressful working out all the little details for the two weeks leading up to the showcase, seeing it all together was definitely worth it,” she said. “I loved seeing my crew members in their beautiful costumes, and it was an honor to perform and dance with them on stage.”

Wong commented on the group’s enthusiasm for attending the event.

“It was our very first showcase, and being one of the smallest and newest dance groups on campus, not many people have heard of us,” she said. “So having so many people show up to support us made us feel really loved and supported.”

Cash On Your Mobile indicates the advantages of fast cash loans