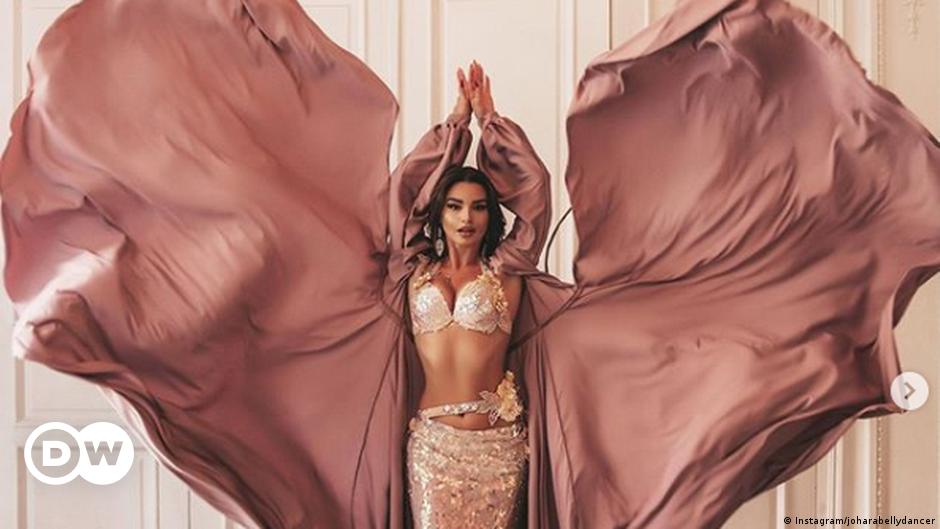 Johara – “jewel” in Arabic – is one of Cairo’s most sought-after oriental dancers. She has a million Instagram followers and her calendar is filled with bookings for parties, clubs, and expensive hotel weddings. In one of her latest videos, the 31-year-old dances in a colorfully cut costume: a silk bra, decorated with long, sparkling chains, and a side-slit skirt revealing her long leg. Her black hair falls to her hips and with every movement her jewelry tinkles to the rhythm of the music. She is surrounded by a crowd and all eyes are on her – men and women film her with their phones as they sway to the beat of the melody.

Johara is actually called Ekaterina Andreeva and is from Russia. For several years, she has lived and worked in Cairo, the cradle of oriental dance. How does a Russian manage to perform traditional Arab dance in Cairo – and be so successful with it?

Andreeva began to dance at the age of three – ballet, ballroom, Latin American styles. At 13, she lost her dance partner – typical in Russia, she says. Male dance partners are hard to find and are frequently “pinched” by other dancers. It may have been a fluke for Andreeva.

A Brazilian soap opera allowed him to find the path of dance. “The Clone” aired on Russian television in 2001 and became a huge hit. Russian viewers were inspired by Jade, the main character, who came from Morocco and impressed them with her skills as a belly dancer. Suddenly there were classes everywhere, Andreeva recalls, including at the gym where she tried belly dancing for the first time. It was perfect for her since she didn’t need a partner. She laughed as she related how her mother said it looked good on her because she hadn’t danced in a while and had gained a little weight.

At first, she mostly danced at her father’s restaurant. After learning the basic techniques, she learned the rest on her own. Soon she began to win league titles and opened her own belly dance studio in Moscow. At the same time, she was busy earning degrees in public relations management and English-Russian translation, but at that time she already knew: “Dancing is my whole life”.

But she felt that in Russia belly dancing was all about making money, and the art involved was incidental, if not irrelevant. It’s different in Egypt, where belly dancing is a way to connect art and culture. So she decided to leave her home and build a new career as a dancer in the Egyptian capital.

Traditionally, Cairo is the birthplace of Arab dance, where great belly dancers, such as Nagwa Fouad, apparently Henry Kissinger’s favorite, learned the art and performed. Legendary dancers such as Dina Talaat Sayed and Fifi Abdou are still loved and admired by many. But today, it is mainly foreign – and especially Russian – dancers who are in great demand.

Nagwa Fouad would have been Henry Kissinger’s favorite dancer

â€œThe older generation of Egyptian belly dancers, well, they’re getting old,â€ says Hany Rasem, a Cairo wedding planner who regularly books belly dancers. “There is simply no new generation coming from Egypt that is this good.” Foreign dancers like Andreeva fill the void. Some days she attends up to five weddings.

Often her audiences don’t even notice that she’s Russian: “Because it’s not our culture, we’re more careful,” she said of herself and her colleagues. It is important to her that the dance remains faithful to its original form and does not change in any way, or become Russified.

A tradition with double standards

But there is another reason for the success of foreign dancers like Andreeva and the lack of Egyptian newcomers. Like many Arab societies, Egypt has become noticeably more conservative in recent decades. In the streets of Cairo, you see more veiled women today. While belly dancers are a must for any respectable wedding, privately many Egyptians prefer not to be associated with the profession – the term “son of a belly dancer” is even considered an insult. It’s a kind of love-hate relationship, a tradition loaded with double standards. Andreeva says her Russian heritage protects her from any negative stigma: “As a foreigner I am more respected because they see me more as an artist.”

However, dealing with authorities and regulatory requirements can be difficult. For each marriage, she needs a work permit, which costs approximately â‚¬ 1,240 ($ 1,365). She is in such demand as an artist that wealthy Egyptians are willing to pay for this, on top of her booking fees.

Yet she also owes some of her fame to a short stay in an Egyptian prison last year. Authorities accused her of dressing too provocatively, thus violating legal guidelines for bellydance costumes. Her case was widely reported by Egyptian media, and the video of her in the controversial outfit went viral, quickly reaching nearly four million viewers. After three days, Andreeva was released from prison and more famous than ever. After the indictment was dropped, she resumed dancing in the infamous outfit. She hasn’t had any problems since.

DW sends out a selection of today’s news and features. Register here.