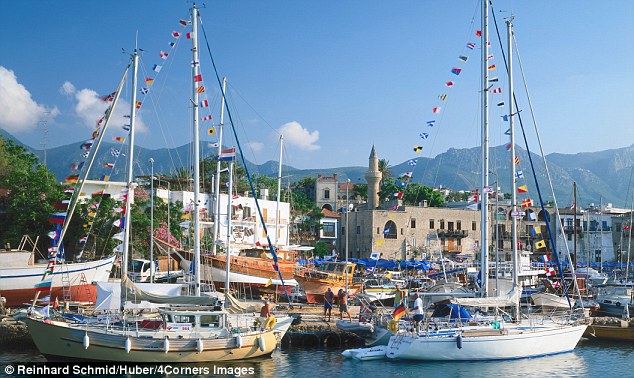 From rock star monks to belly dancing on the beach, North Cyprus really has it all

When it comes to planning a vacation, it’s not easy to please a family of five. Mrs. Hamilton wants castles, churches and preferably sunshine. The three pincers want the sun, the beach and certainly no churches. And I want – well, a castle or two, some museums and most of all food.

â€œWhat about Northern Cyprus? Mrs. Hamilton said hesitantly. â€œThere are castles. And beaches. And the sun. ‘ She paused before delivering the clincher. â€œAnd the food is supposed to be fabulous. ”

A few weeks later we were on our way to Turkish-controlled Cyprus, the northern half of this beautiful but still divided island. Our trip was hijacked, even by plane. The delicate political situation means that all international flights must first land in Turkey before continuing north. (You can also fly to the Greek half of the island and then cross the land border north, which I would do next time.)

We hired a car on arrival and headed for the north coast, reaching Kyrenia just as the sun was setting in the sea. It’s a postcard-perfect fishing port with a horseshoe port. The formidable fortress which stands guard at the entrance to the port welcomed Byzantines, Franks, Venetians and Ottomans. It is at sunset that it is most breathtaking: from the top of the ramparts, we had a golden panorama of minarets and mountains.

The harbor is flanked by tall Venetian warehouses, most converted into bustling fish restaurants with far lower prices than anywhere else in the Mediterranean. For the price of a McDonald’s meal, you’ll be treated to mezes, grilled fish, eggplants and a bottle of local wine.

If Kyrenia were located in the Greek half of the island, it would be crowded. It is certainly more and more popular, as vacationers discover the charms (and the cheapness) of Northern Cyprus.

More and more expats are also buying here – the influx of new money has led to a mini-boom in the local economy. It may only be a matter of time before the Turkish north mirrors the Greek south. Still, there is still an air of the 50s about the place, and that’s half of its charm. It is as if the old Med could still be glimpsed here. Inland, much remains unchanged.

We drove to the sleepy village of Bellapais, where Laurence Durrell wrote Alexandria Quartet and Bitter Lemons, her colorful portrayal of life back when camel trains still passed under her bedroom window. Durrell moved here to get away from it all. He wanted a place where peace would be guaranteed to him. He chose his place well.

His neighbors would sit under the Tree of Idleness, as he called it, and spend the afternoon playing backgammon and sipping coffee. Very little has changed. In fact, I wouldn’t be surprised if the mustache grandpas in cafes were the ones Durrell used to meet when they were still young boys.

The real draw of the place is the crumbling Gothic monastery with its empty windows and fractured masonry, one of the great tourist spots in Cyprus. Even our children were impressed. It was built by monks who fled to the island after being expelled from Jerusalem in the 12th century.

“I was prepared for something beautiful,” wrote Durrell, “and I already knew that the ruined monastery of Bellapais was one of the finest Gothic survivals of the Levant.” But nothing prepared him or us for the stunning natural beauty of the setting – the jagged mountains, flower gardens and village houses built of stone the color of ripe cheese.

A life of prayer was not a priority for the monks who lived here. They grew rich in spectacular fashion from donations left by pilgrims, then exploded their fortunes in riots – a medieval version of the feast of “vicars and tarts”. We spent the afternoon on one of the many beaches in Northern Cyprus, Acapulco, a stretch of sand a few kilometers east of Kyrenia.

At one point, we were approached by a â€œbeach entertainerâ€ who asked us if we wanted to sign up for a belly dance class. â€œYou have the stomach,â€ said Ms. Hamilton. I politely declined. ‘Are you sure?’ she said a little too insistently. The next day we saw again on the tourist trail.

This time we headed to one of North Cyprus’s five star sites, St Hilarion Castle, high in the mountain range that runs through the center of the island. It is the vertiginous location of the castle that makes it so spectacular.

The broken shell sits atop an impregnable limestone cliff that rises vertically up into the blue Mediterranean sky. It was once the summer palace of the Crusader kings who conquered Cyprus and then decided to stay. It had to be a cool place to retreat during the summer heat: the air stays cool here, even when it’s very hot in Kyrenia, far below.

Entire sections of St Hilarion have been destroyed by the elements. But fragments of Gothic interlacing recall the ancient luxury of the interior of the palace. It’s a steep climb to the tallest tower and hard work even in the cool breeze, but well worth it for the fantastic view.

You’ll need a car to explore the island’s east coast, presided over by the medieval walled town of Famagusta, another gem. Here you will find miles of deserted golden beaches. Be careful though: it’s very different from the coast around Kyrenia. There are no lifeguards, few bars and certainly no belly dance classes.

Crowds were also absent on the remote peninsula of Karpasia – along Panhandle in the northeast of the island. Its small villages, even sleepier than Bellapais, are dotted with old Byzantine churches (many locked, to the delight of children) and friendly cafes. â€œNow,â€ I said, â€œwe have built beaches, castles and churches. It’s time for gastronomy.

As we settled into a small family-owned fish restaurant in the port of Boghaz, a squeaky-wheeled cart was majestically steered from the kitchen. Mashed smoked eggplant, squid marinated in olive oil, pieces of fresh fish with lemon and spicy meatballs – an endless procession of Turkish meze was bought at our table.

“These are delicious,” I said, devouring the last meatball. â€œI will order more. “” On one condition, “said Mrs. Hamilton. “You’re doing belly dancing class on the beach tomorrow.” – Yes, yelled a choir of children. I promised I would. But I did not do it.