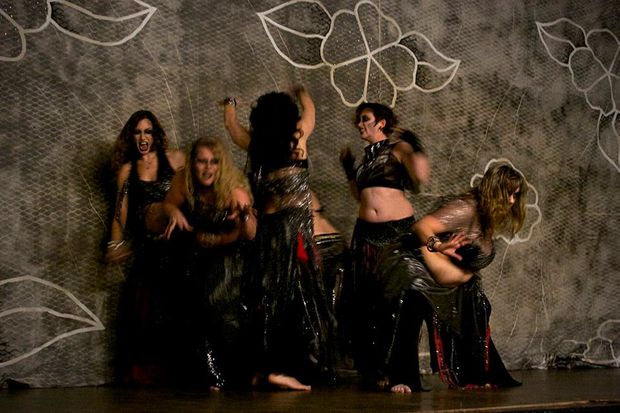 The Glint will host a “Seven Deadly Sins” themed performance at Bridgeport on Saturday, the group’s last show of the year.
See the full legend

BRIDGEPORT – A special belly dance show at the orphanage on Saturday will help get you into the Halloween spirit.

The Glint, one of Chicago’s only belly dance performance companies, will host its last show of the year on Saturday at The Orphanage, the performance venue of the First Lutheran Church of the Trinity, 641 W. 31st St.

This performance will have a “Seven Deadly Sins” theme, and unlike most oriental dance shows, each act will be long-lasting (around 8-16 minutes, compared to a typical 2-3 minutes) and will focus on storytelling, a said Mae Phillips, founder of The Glint and director of the show.

â€œI wanted to show young people how we were doing back then, when every dance performance had a beginning, middle and end, and give them the space to explore dance through storytelling,â€ said Phillips on the show. .

Glint’s production is unusual in other ways as well. On the one hand, it takes belly dancing out of the familiar surroundings of the restaurant or hookah lounge, making it more of an artistic performance. In addition, each of the performers will share the proceeds of the evening, which Phillips said was unusual for artists who love oriental dance.

â€œI created Glint to have a place where people can perform and get paid and kind of raise it in Chicago,â€ she said.

The Glint has had most of its shows at the Bridgeport Theater since 2014, and it produces five shows a year, Phillips said. Next year, the company has big plans to celebrate its 10th anniversary by hosting oriental dance performances in Chicago.

Doors will open at 9 p.m. and the show will begin at 10 p.m., Phillips said. Tickets will cost $ 15, and cash and cards are accepted. There will be seating, but guests are encouraged to bring pillows and blankets to sit on, as well as a cooler for drinks, Phillips said.

Souvenir of Tahia Karioka: a bit of belly dancing and a lot of comedy – film – arts & culture