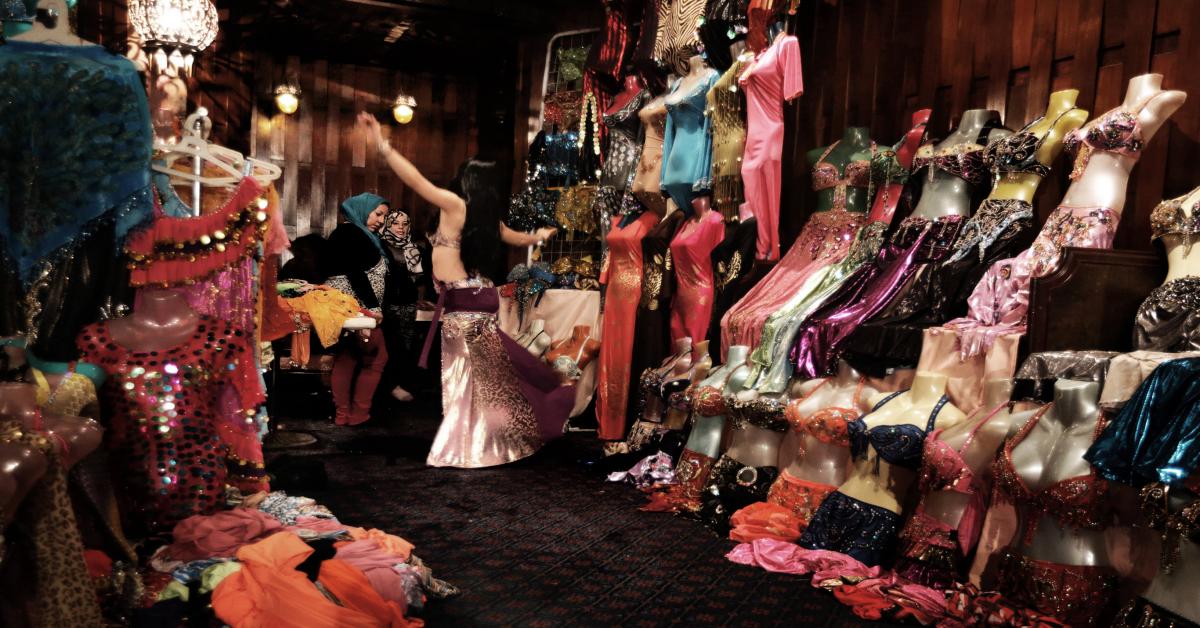 Egyptian oriental dancers fight to protect their profession from “intruders” who they say have distorted the dance style for a long time. But as more and more non-Egyptian dancers come to Egypt to start their careers and new musical genres emerge, the fight becomes more difficult.

Most Egyptian oriental dancers danced to classical Arabic music or Umm Kulthum songs translating the melodies through their body movements and using their faces and muscles to express the meaning of the songs, without uttering a word. These performances would give the audience a sort of sacred feeling and pure enjoyment of this authentic Egyptian art form.

Although few Egyptian dancers such as Fifi Abdou, Dina, Lucy and others still offer this beautiful experience, a new generation of dancers prefers to dance to songs of “mahraganat” (“festival”). The mahraganat is a genre of Egyptian electronic and street music that emerged as a result of the 2011 revolution.

â€œToday, few dancers dance to traditional music. I prefer to dance to the mahraganat because it makes people dance and jump because of its fast rhythms, â€Nora, an Egyptian belly dancer who dances in different venues in Cairo, told Al-Monitor.

In the past, various Egyptian dancers have launched campaigns to help oriental dance regain its throne. More recently, famous oriental dancer Randa Kamel launched a campaign to preserve traditional Egyptian oriental dance. The campaign was joined by other dancers.

When belly dancers dance on the mahraganat, they move their bodies faster, shake their breasts and hips vulgarly, or even point to sensitive parts of their body. It is because of the rhythms of the music and sometimes the vulgar lyrics of the songs that the dancers have chosen to attract the attention of the audience. This type of dance is rejected by traditional dancers who believe that every movement they make should be guided by music and should be artistic rather than vulgar.

â€œEgyptian dance is of course sensual but it should not be confused with vulgar sexuality. Don’t abuse your body to advertise your skills. I expect dancers to wear at least one bra and shorts and respect themselves and their art, â€Kamel wrote on his Facebook page.

â€œI also expect dancers to use the right terms when describing their performance – ‘Mahragan’ is’ Mahragan ‘/’ Oriental ‘is’ Oriental. Â»Protect our art and yourself. I don’t think that’s too much to ask, â€she continued.

Oriental dance has deep roots in Egyptian culture. In ancient Egypt, women danced to court the gods, and it was like a ritual of worship shown on the walls of some temples. It subsequently became entertainment for kings and members of the royal family.

One of the oldest forms of modern dance appeared at the beginning of the 19th century with the gypsy women who were called “ghawazi” (“intruders”) because they invaded the dance profession and performed asymmetrical movements and indecisive by relationship to music and rhythm. . They mainly occur in Upper Egypt.

At that time, the original Egyptian dancers were called â€œawalemâ€. They competed with the ghawazi and followed the dancing rules and steps of their ancestors.

Many dancers have achieved fame. One of the first famous dancers of the 19th century was Safiqa el-Keptia, whose life story was presented in a film (1963) named after her. Then came Badia Masabni, a Lebanese dancer who lived in Egypt and became known as a belly dancer. Masabni founded a theater and troupe in which she trained many dancers who rose to prominence in the 1940s, 1950s and 1960s, and who appeared on the big screen, including Samia Gamal, Tahia Karioka and Naima Akef.

Safy Akef, oriental dance teacher and granddaughter of Naima Akef, the famous Egyptian actress and belly dancer who has appeared in many films, including “Baladi wa khafa” (1949), “Arbah banat wa zabit” (1954) and “Tamr Hinnah” (1957), has been training dancers for 10 years in his academy. She also believes that oriental dance should be protected.

â€œI wanted to continue my career as a belly dancer, but although some members of my family are artists and dancers, they refused because now dance has become a commodity. The more you show off your body, the more money you will earn, â€Akef told Al-Monitor.

Akef believes that oriental dancing started to change or even decline in the early 2000s, when many Russians started coming to Egypt and made belly dancing their profession.

â€œWhen dancers dance in front of drunken audiences in nightclubs, they exaggerate their movements, looks and gestures. They don’t actually dance but arouse sexual desire and it’s not the art that we love and seek to protect, â€Akef noted.

According to section 430 of the Literary Censorship Act 1955, dance attire must cover the lower body, without side slits, and must cover the breasts and stomach.

â€œBellydance is part of our culture. Why deny it? We just have to follow the rules and protect them, â€Akef added.

When gyms started including belly dancing in their programs, it turned into a fitness practice. Dance classes for women started about 10 years ago in Cairo with an Egyptian-Senegalese trainer, Aicha Babacar.

Nehad el-Sherif, a veiled young woman who has worked as a belly dance trainer for three years, said people like to define belly dancing as a kind of fitness practice.

â€œI don’t just make women dance to music, I teach them to move and release negative energy. I define it as a class for the mind, â€Sherif told Al-Monitor.

Sherif, who has been dancing since childhood, is currently an oriental dance teacher in Alexandria and has given dance lessons in Turkey and France.

â€œI like the old form of oriental dance. But now, because many Europeans and foreigners make belly dancing their profession, that has changed, â€said Sherif.

For her, oriental dance is a vital thing that can set the mood.

â€œBellydance is the best thing in the world and all women love it. But non-Egyptians appreciate oriental dance more than Egyptians. There are a lot of belly dance studios in Europe, for example, but here the dance lessons are either in gymnasiums or in studios offering other forms of dance, â€said Sherif.

â€œI hope people will protect belly dancing and know its importance,â€ she concluded.