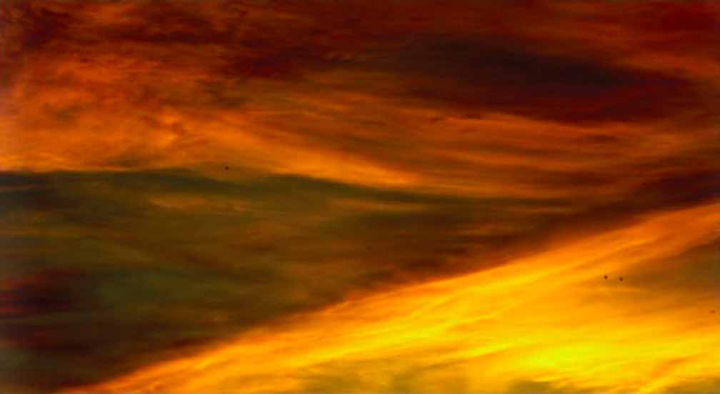 Shining brightly in the spotlight on stage, Filipino performance art titans Nonoy Froilan and Edna Vida share the lights of the exhibition space runway together as visual artists for the first time.

The couple of nearly five decades team up to showcase another side of their art at Conrad Manila’s Gallery C, featuring Froilan’s photographs and Vida’s paintings. The show, titled duetsopened recently and is on view until January 8.

Nestor Jardin, fellow dancer and former president of the Cultural Center of the Philippines, hosted the presentation. He described the project as “exciting and challenging”, having to marry two different forms of visual art, while working on diverse subjects: Froilan with his cloudscape shots and Vida with depictions of dancers.

“It took me days to sift through hundreds of Edna’s paintings and Nonoy’s photographs, trying to see the points of similarity and confluence in their works,” Jardin said during the opening. “In terms of style and form, color, movement, energy and emotions, I finally saw points of convergence. Thus was born the thematic and curatorial idea of duetsor partners.

“Edna and Nonoy,” he adds, “must be some of the most versatile artists I’ve ever known. I have always admired their works, whether in dance, theater and now in the visual arts.

The premier Filipino dancer of his time, Froilan exemplified how male dancers can shine their own light alongside prima ballerinas. For his lifelong contribution to the development of dance in the country, he was awarded the prestigious Gawad CCP Para sa Sining 2020 for dance.

After retiring from the stage, Froilan founded the Froilan Video Arts and took up photography as a hobby. He regularly captured cloudscape shots from their home overlooking Makati, Mandaluyong and Manila.

“Why clouds? Because it poses a challenge like in dancing, where if you hesitate it becomes a moment lost, done and gone,” he said, adding that to date he has more than 9,000 images of cloud formations that he takes “almost daily, all from my window.”

If Froilan admits having uncertainties with his new job, he continues to dare, as he did in dance. A brave and unyielding state of mind that captured photographs marked by dramatic flashes and, of course, movement.

“When I see Nonoy’s works – maybe he doesn’t recognize them because he sees them with his own eye – I see dance,” Vida said. “In its clouds, I see pirouettes and big throws. I see scenographies behind the colors. Nonoy has always been interested in lights and colors.

For her part, Vida is no stranger to art exhibitions. She had some exhibitions for her paintings, being the ever multi-talented artist. Apart from being the principal dancer of Ballet Philippines and one of its main choreographers, Vida is also a theater actor, writer, cartoonist and art critic.

When the pandemic hit, Vida felt the need to pick up the brush once more. “Lockdowns have changed me and Nonoy a lot,” she said. “Being imprisoned in the state of darkness is the best time to be an artist.”

According to Vida, she and her husband had no form of conversation about confluence of their works for the exhibition, before throwing in a qualifier.

“Well, I always ask Nonoy if my work is pleasant or not. Sometimes he says, ‘That’s not nice. It is not finished yet. And I say, ‘Okay.’ But I always say her pictures are beautiful because I’m nicer,” Vida said, making her husband laugh.

their show, duets, was the singular idea of ​​Jardin, whom Vida considers a true advocate for the arts, as well as a friend, adviser, mentor and brother. Jardin presented the works of Vida and Froilan in 25 pairs, each with its thematic origin and inspiration.

Comfort inspires harmony in sight and thought with Froilan’s snapshot of a starless night, titled Moon of bloodmatching Vida On stage 64, showing a dancer in red, her torso upturned and her arms outstretched, lost in the call of her passion. Meanwhile, Hope features a photo of a towering streak of white clouds against an ocean sky, titled Eiffel Towertogether with Gisele 3in which the subject is frozen in a pose.

National Dance Artist Alice Reyes was present at the opening. She said the exhibit should remind dancers of the possible life that awaits them after retirement. “What excites me the most about this moment is the fact that there are many artists, dancers who are wondering where they are going to go after they finish performing, and here are three fantastic examples,” said she declared, alluding to her. Sister Vida, Froilan and Jardin. “This is a promising development for dancers. There is a fantastic life after dancing. But as long as you know how to dance, dance!

Meanwhile, according to Linda Pecoraro, General Manager of Conrad Manila, the exhibition complements Conrad Manila’s artistic program which inspires guests. duets serves as the 17th art installation at Gallery C since the hotel’s art program launched in 2017. The show is their third art presentation since the pandemic began.

“We reiterate our commitment to enshrine our heritage of allowing our guests to experience luxury and authentic Filipino hospitality,” Pecoraro said. “Through the inspiring visual works of duetssee the future as bright and beautiful.