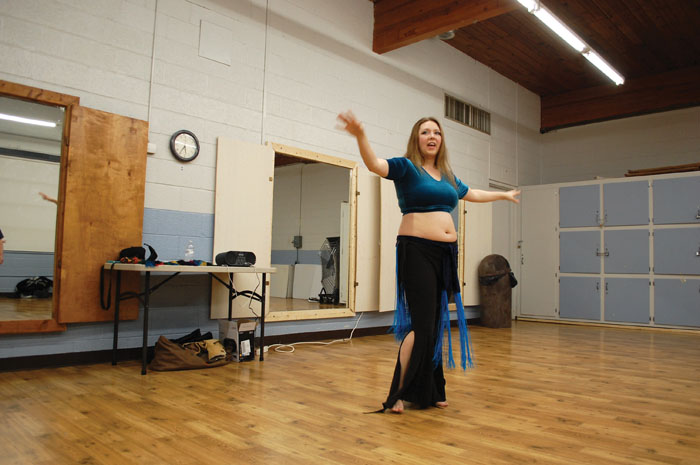 SALISBURY — When City Park belly-dancing instructor Fern Blair was growing up, she didn’t like to dance.

“I was actually a little girl and my mom signed me up for ballet. And I walked through the door, and I remember looking at all the other little girls and saying, ‘I’m not not one of those little girls,” Blair said.

But when she first tried belly dancing 12 years ago, she knew it was for her.

“Because belly dancing really is for everyone. It’s kind of a low impact dance. It’s focused on isolations and just a bit of layering and the music is really, really fun and the costumes are really, really fun,” Blair said.

Blair – whose performance name is Firuza – said the dance style had nothing to do with the “sensational, fictionalized version” that Hollywood has portrayed since the early 1900s.

“It created this modern image of a belly dancer,” Blair said. “… But what has happened since then is that in America and in other cultures – like Egypt and Lebanon, where these traditional and original cultures originated – they found this dance and they created their own styles which are modern versions. And it has nothing to do with that sketchy Hollywood stuff.

Instead, she said, belly dancing is “woman-friendly,” “body-image friendly,” and suitable for all ages and sizes.

“And it’s really great not only for your physical health — tone and flexibility — but for your emotional health because you get support from all these other women you meet in the community,” Blair said.

Since she started belly dancing, she has been “drawn into a community of women”.

“The instructors I’ve had have been so wonderful. There is no drama. It’s about having your own space, having confidence, having a good time, expressing yourself. It’s not about the competition,” Blair said. “It’s been wonderful for me.”

Blair said the women she met in the dance community are part of what inspired her to start a class in Salisbury, where she lives.

“I really hope I can offer the opportunity here. There are a lot of people who are interested and they might not be able to get to a belly dancing class because they don’t want to drive an hour So hopefully that can provide an outlet for that and I’ll see if that takes off,” Blair said.

Blair performs with three belly dancing groups, the closest of which she says is 45 minutes away. One is called Rhythmic Essence Belly Dance, which is in Newton; another is Rockabellas, which is north of Charlotte; and another is Roses of the Realm, which performs at the Carolina Renaissance Festival.

“I’m just excited to be able to have it here in my own hometown,” she said.

Blair said her first belly dancing experience was at a local YMCA when she lived in Virginia.

Anyone who’s nervous about trying dancing, she says, should keep in mind that “you never know” what you’ll like.

“You should always try things. I think it’s really fun to try things out and see if you like it,” Blair said. “And, I mean, I did and I’ve been doing it for 12 years.”

Each class costs $5. No previous dance experience is required. Participants are encouraged to wear activewear and bring a bottle of water.